The mode argument can be one of the following:

“r” – Read mode. The file is opened for reading only.

“w” – Write mode. The file is opened for writing only. If the file already exists, its contents are overwritten. If the file does not exist, it is created.

“a” – Append mode. The file is opened for writing only. If the file already exists, the data is appended to the end of the file. If the file does not exist, it is created.

“x” – Create mode. The file is created for writing only. If the file already exists, the operation fails.

“t” – Text mode. This is the default mode. In text mode, the file is opened for reading and writing.

“b” – Binary mode. In binary mode, the file is opened for reading and writing.

Once a file object has been created, various methods can be called on the object to perform various operations. The most common methods are read(), write(), and close().

The read() method is used to read data from a file. The read() method takes one argument, the number of bytes to be read. If no argument is specified, the entire contents of the file are read.

The close() method is used to close a file. Once a file has been closed, any further attempts to read from or write to the file will fail.

What is file IO?

File IO, or input/output, is the process of reading and writing data to and from files. In Python, this process is relatively simple thanks to the built-in open() and close() functions.

The open() function takes two arguments: the path to the file to be opened and the mode in which to open the file. The mode argument is optional and defaults to ‘r’ (read mode). Other possible values for mode are ‘w’ (write mode), ‘a’ (append mode), and ‘r+’ (read/write mode).

Once a file has been opened, it can be read from or written to using the file object’s read() and write() methods, respectively. When finished, the file should be closed using the close() method to ensure that any remaining data is flushed to disk.

Python also provides a number of built-in functions for working with files, such as os.path.isfile() and os.listdir(), which can be used to check if a given path is a file or directory, respectively.

Python is a high-level, interpreted, general-purpose programming language, created on December 3, 1989, by Guido van Rossum, with a design philosophy entitled, “There’s only one way to do it, and that’s why it works.”

In the Python language, that means explicit is better than implicit. It also gives rise to the infamous Python telegraph pole analogy attributed to creator Guido van Rossum, which goes like this:

There is beauty in π, elegance in an all-numeric telephone keypad . . . I am attracted to the simpleness of a perfect poker face, and the serenity of perfect punctuation mark placement. Just as art to be appreciated, comments to be enjoyed, and data to be played with, I enjoy reading Python philosophy.

How to do file IO in Python

Python provides a number of ways to perform input/output (I/O) operations on files. The most common way to do this is using the built-in open() function. This function takes two arguments: the name of the file to be opened and the mode in which the file should be opened.

There are four different modes that can be used when opening a file:

“r” – This is the default mode and is used for reading files.

“a” – This mode is used for appending data to a file. If the file doesn’t exist, it will be created. However, if the file does exist, the new data will be added to the end of the file.

“x” – This mode is used for creating and writing to a new file. If the file already exists, an error will be raised.

It’s also important to note that when you’re finished working with a file, you should close it using the close() method. This will ensure that any changes you’ve made to the file are saved and that the file is properly cleaned up.

Here’s a quick example of how to use the open() function and the read() method to read the contents of a file:

And here’s an example of how to use the open() function and the write() method to write some data to a file:

As you can see, working with files in Python is relatively simple. However, there are a few things to keep in mind, such as properly opening and closing files, and using the appropriate mode when working with files.

READ More:  How do you do a simple Dutch braid?

In conclusion, file IO Python is a great way to read and write files. It is simple to use and can be very helpful in a variety of situations. 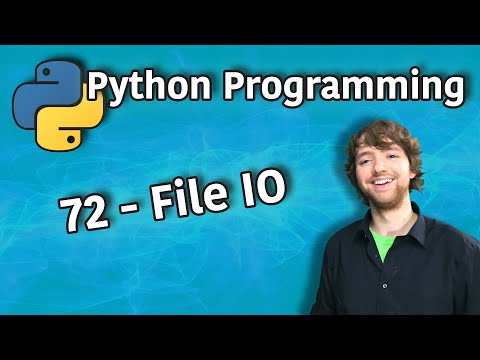 Input/Output operations such as open, close, read, write and append, all of which deal with standard disk or tape files. The term would be used to refer to regular file operations in contrast to low-level system I/O such as dealing with virtual memory pages or OS tables of contents.

What is file stream Python? :

The file object is a data stream that supports next() method to read file line by line. When end of file is encountered, StopIteration exception is raised. f=open(“python.txt”,”r”) while True: try: line=next(f) print (line, end=””) except StopIteration: break f.close() Output: Beautiful is better than ugly.