FWIW stands for “For What It’s Worth” . It’s commonly used online in forums and comments sections as a way to preface something that may not be important or newsworthy.

So why is it considered rude? Well , some people see it as a way of saying “I don’t really care about this” or “I’m only posting this because I think it’s mildly interesting”. In other words, they feel like you’re trying to waste their time.

Of course, there are also people who see it as harmless and simply a way to share something they thought was interesting. So, as with most things in life, it really depends on the person you’re talking to.

If you’re not sure whether or not someone will appreciate your FWIW comment, it’s probably best to err on the side of caution and not use it.

The history of FWIW

FWIW is an internet acronym that stands for For What It’s Worth. It is used to preface statements that the speaker believes to be true, but cannot guarantee. The phrase is often used to introduce new information or to offer an opinion.

The use of FWIW dates back to the early days of the internet, when users would post messages in forums and chatrooms. It was a way of indicating that the information being shared was not necessarily reliable, but could be interesting or useful nonetheless.

Over time, the acronym has become more commonly used in casual conversation, both online and off. It is often seen as a way to hedge one’s bets, or to avoid sounding too confident.

While FWIW can be seen as rude, it can also be interpreted as humble. It is a way of acknowledging that the information being shared is not definitive, but is worth considering nonetheless.

How is FWIW used today?

FWIW, “for what it’s worth,” is commonly used on the Internet and in texting. It usually appears at the beginning of a sentence and is used to introduce a piece of information that may or may not be useful to the person reading it.

For example, you might text your friend, “I saw that new movie you wanted to see. FWIW, I thought it was terrible.” In this case, you’re giving your opinion on the movie, which may or may not be helpful to your friend.

Similarly, you might see a post on a message board that says, “FWIW, I just got a new job.” The person who posted this is letting others know that they have some relevant experience, but they’re not trying to boast or brag.

In general, FWIW is a polite way to introduce new information. It shows that you’re not expecting others to care about what you’re saying, but you’re providing it anyway in case it’s useful to them.

This is a question that we get a lot, and it’s one that doesn’t have a clear answer. There are a lot of opinions out there on whether or not FWIW is rude, and it really depends on who you ask.

So, what’s the verdict? Is FWIW rude?

Ultimately, it’s up to you to decide whether or not you want to use FWIW. If you’re not sure, err on the side of caution and avoid using it.

Is “for what it’s worth” rude? No, not really. It’s a phrase that people use to preface their opinion on something, usually when they’re not sure if it’s worth sharing. It’s a way of saying, “I don’t know if this is important, but I thought I’d mention it anyway.”

There are some people who might interpret the phrase as being condescending, as if the speaker is saying, “This probably isn’t worth your time, but I’m going to tell you anyway.” However, I don’t think this is the intention of the phrase. I think it’s simply a way of indicating that the opinion being shared is not necessarily a strong one.

So, in conclusion, “for what it’s worth” is not rude. It’s just a way of indicating that the opinion being shared is not necessarily a strong one. 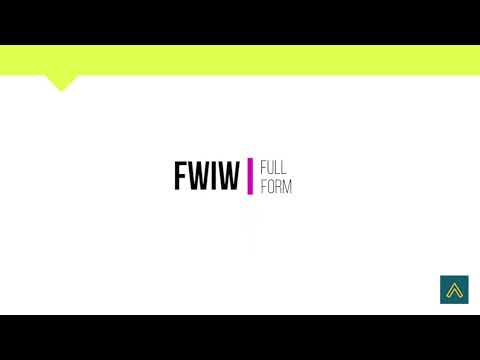 What does FWIW mean urban dictionary? :

(Internet slang, text messaging) Initialism of for what it’s worth.

What does FWIW mean Greentext? :

FWIW stands for “For What It’s Worth.” You can use this abbreviation when you want to add information in a text or message.

What is the meaning of RTFM? :

abbreviation Slang. read the fucking manual (a euphemistic acronym used sarcastically in response to, or in reference to, someone asking for technical help): He won’t RTFM and then complains that he can’t get through to tech support.